A Hillman Publication
Printer
Printed in the United States of America 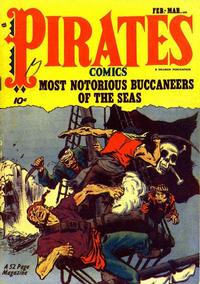 The Sea Witch (Table of Contents: 2)

Suchorsky is credited with "The Sea Witch" by Jerry Bails' Who's Who.

First Line of Dialogue or Text
It was a time when the colorful galleys of the mighty Roman Empire plied the seas...
Genre
historical
Characters
Alpha (galley slave); Gaius; Tribune Cincanus; Demos (galley slave)
Synopsis
After a storm wrecks the galley, Alpha and the other slaves fight their way to freedom.
Reprints

The Viking Terror (Table of Contents: 6)

First Line of Dialogue or Text
We are back in the time of Columbus, and we're aboard an English ship that nears the seacoast of Spain...
Genre
historical
Characters
Philip Ashton; Riviera; Don Grinaldo; Dona Inez; The Sack [Abad]; Don Ivizco; King Ferdinand; Queen Isabella
Synopsis
Philip goes to his Spanish uncle's place and is captured by pirates.
Reprints