Most Notorious Buccaneers of the Seas (Table of Contents)

Faces and inking points to Suchorsky. 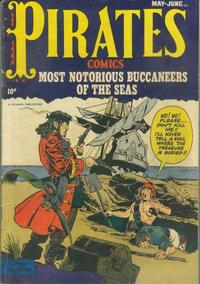 Cusack the Pirate (Table of Contents: 2)

Genre
historical
Characters
Cusack (pirate); Captain North
Synopsis
Cusack and several men manage to break out of prison and take over a ship to turn pirates. Based on a true story.

Pirate on Wheels (Table of Contents: 4)

Genre
historical
Characters
Oleg (Rus viking of Kiev)
Synopsis
Swedish vikings from the Rus kingdom of Kiev sail down the River Dnieper to get to Constantinople for a plunder.
Reprints

Dressler drew Howard Pyle's "Men of Iron" and Robert Louis Stevenson's "The Master of Ballantrae" for Classics Illustrated, and some westerns for Hillman. He can be recognized by his inklines and bright eyes in close up.

Genre
historical
Characters
Bey of Tunis; Commodore Preble
Synopsis
In the year 1803, a squadron of American Navy ships fights the pirates of the Barbary Coast of Tunis.

Genre
humor; historical
Characters
Captain Pork-Chop; Pirate
Synopsis
They dig and find the treasure of Captain Blackbeard, but it is not to be opened until Christmas.
Reprints

Genre
historical
Synopsis
When the American colonies are forbidden to trade with foreigners, they take up trade with the pirates instead.
Reprints