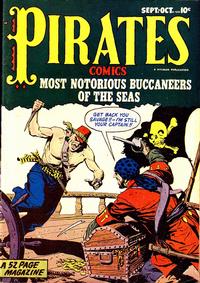 First Line of Dialogue or Text
It was a time when the gilded war galleys...
Genre
historical
Characters
Alpha; Gaius
Synopsis
Alpha, an ex-Roman slave, along with his loyal followers on the Golden Eagle captures a Roman galley.

The Pirates of Tripoli (Table of Contents: 4)

Genre
historical
Synopsis
Ships of the young nation of the United States are being raided by pirates from Tripoli in North Africa.

Tale of a Buccaneer (Table of Contents: 5)

Regin and the Pirate Rovers (Table of Contents: 6)

Genre
historical
Characters
Regin; Gerta
Synopsis
Viking raiders invade a castle where a wedding feast is taking place and take away the bride-to-be.

Dressler drew Howard Pyle's "Men of Iron" and Robert Louis Stevenson's "The Master of Ballantrae" for Classics Illustrated, and some westerns for Hillman.

The Comics that Always Win the Pennant!! (Table of Contents: 8) (Expand) /

Genre
humor; historical
Characters
Lockjaw (parrot); Captain Hook; Biceps (pirate)
Synopsis
Only Lockjaw knows where Captain Kidd's treasure is hidden, and the pirates will have him to talk.

First Line of Dialogue or Text
At last my opportunity is at hand!
Genre
historical
Characters
Philip Ashton; Don Romulo (villain); the Sack (pirate)
Synopsis
Don Romulo tries to get ransom money for releasing the Sack.