The Devil You Know (Table of Contents) 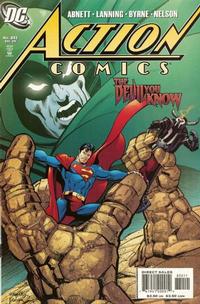 Genre
superhero
Characters
Superman; Lois Lane; Spectre; Willis; Satanus [Collin Thornton]; Sam Lane (ghost)
Synopsis
Superman investigates a storm and encounters the Spectre. Colin Thornton realizes that the Spectre is coming for him and broadcasts a spell to have spirits rise to his defense. Superman confronts Thornton, who reveals himself to be Satanus. Sam Lane's ghost appears and directs all the other ghosts from Lois. They have a heart-to-heart talk while awaiting rescue. The Spectre comes, immobilizes Superman, and crushes Satanus, apparently destroying him. Sam leaves Lois, the Spectre disappears, the storm ends, the ghosts disappear, and Superman rescues Lois.
Reprints
Keywords
ghost; Halloween

Ads for next issue, Hard Time: Season Two, and Infinite Crisis #1. Appears on page 34 in this issue.