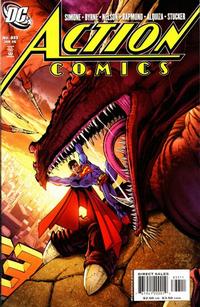 Genre
superhero
Characters
Superman; Lois Lane; Willis; Queen of Fables [Tsaritsa]; Jimmy Olsen; Josef Schuman; Leslie [Livewire] (voiceover)
Synopsis
Lois is kidnapped by two of Congressman Shephard's flunkies. A deep sea submersible is attacked by the Queen of Fables, and Superman rescues the crew. Superman meets Mr. Schuman, who invites him to Shabbos dinner. The Queen tracks Superman to Metropolis and changes reality so that Superman is a prince of a medieval kingdom. He refuses to court her, so she sends a troll to devour Jimmy. Superman rescues him, and the Queen says he is worthy, but Superman still refuses her, and says he will fight her. She restores reality but warns that she will be back.
Reprints