This was the final Deadworld issue printed by original publishers Arrow comics. The story contained precludes 'Doom Patrol' that appeared in Caliber presents #2 before the ongoing series continued with issue #10 by Caliber press.

This comic bears the INDEPENDENT COMIC PUBLISHERS ASSOCIATION (ICPA) logo, a symbol of quality in the small press, black and white market. The ICPA was formed to promote excellence in and further public awareness of this growing segment of the comic book industry.
This issue has variants: 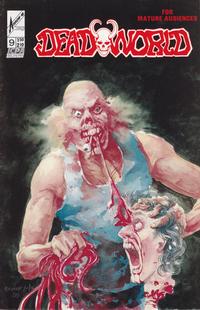 First Line of Dialogue or Text
I heard someone moving around outside my window...
Genre
horror-suspense
Characters
King Zombie; Percy; Wolverine; Dan; Joey; Bowker; Punk; Eddy; Mike Hunter; Moloch
Synopsis
Survivors held in an underground prison discuss how they got there and how to get out while above ground the swastika tattooed Wolverine battles the undead in a gladiatorial pit. Mike Hunter is loaded onto a helicopter where Bowker and Moloch interrogate him on the nature of King Zombie who leads an army of dead in the countryside below.
Keywords
Zombie apocalypse

This was the final Deadworld issue printed by original publishers Arrow comics. This story precludes 'Doom Patrol' that appeared in Caliber presents #2 before the ongoing series continued with issue #10 also published by Caliber.