This is the 'tame' cover variant, suggested for newstands where the graphic cover may cause offense. 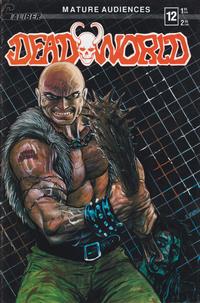 Bryan Andrews discusses Deadworld's schedule and the change of artists with Mark Bloodworth on inking duties while Vincent Locke switches to inks. The editor also mentions the Deadworld compilation book from Caliber while deriding the previously released version by Wee-Bee comics and how Vincent Locke would never see any money from their sale due to a contentious contract and further actions from the publisher.

First Line of Dialogue or Text
Well, Well...Look what we've got here,
Genre
horror-suspense
Characters
King Zombie; Bowker; Joey; Dan McDonald; Donna; Moloch; Percy; Graken; Wolverine; Deake
Synopsis
The remaining band of survivors are once again captured when falling through the ducting system they were using to escape and Dan is forced to fight Wolverine in the gladiator pit. Nearby Moloch's men wait for an evac by their stranded helicopter as King Zombie and his Graken pick off another patrol.

When a Body Meets a Body Part 3 (Table of Contents: 5)