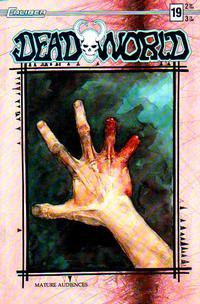 Once again informs to Deadworld's sporadic scheduling and the change from releasing 'The Rising of the Dead' as a mini-series and instead having its material be absorbed by the regular series.

Elsewhere near Millsboro, Stacey recollects how her party of townsfolk witnessed the rising of the dead and how they had to shoot their way out to survive.

Meanwhile in Ontario a chopper with two survivors take the Sarnia, Chatham and Windsor turn off and have their first clash with the undead.
Keywords
Chatham; Millsboro; Ontario; Sarnia; Windsor

This issue brought together Deadworld's regular ongoing story and the off-shoot 'The Rising of the Dead' that was originally intended as a mini-series that was to be published separately.

Due to Deadworld's well documented scheduling problems, Caliber decided to use material from the mini series to make the regular Deadworld title more punctual. With it came a different combination of writers and artists, even in a single story.

Part One (Table of Contents: 8)

First Line of Dialogue or Text
He marvelled at the silence with the wind still, even the leaves rested.
Genre
horror-suspense
Characters
Dead-Killer
Synopsis
Armed only with a machete and his intuition the lone hunter; 'Dead-Killer' tests himself in combat against the undead he has been tracking while under the cover of darkness.