The Smasher Strikes! The Disruptor Destroys! (Table of Contents) 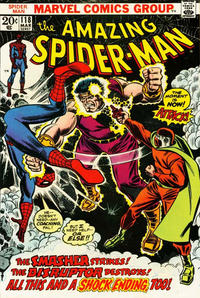 Countdown to Chaos! (Table of Contents: 1)

This story incorporates, and greatly revises, material from Spectacular Spider-Man #1 (1968). Many new pages are included, and changes are made to conform to current continuity, including re-drawing the deceased Captain Stacy and replacing him with Joe Robertson and giving Raleigh a costumed identity as the Disruptor. Info per Nick Caputo, March 2019.

Statement of Ownership (Table of Contents: 2)

Location in issue is unknown.