The Grim Hand Of Death (Table of Contents) 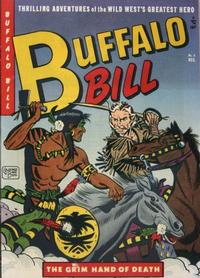 The Grim Hand Of Death (Table of Contents: 1)

Swift Deer and the Russian Bear (Table of Contents: 2)

Wyatt Earp And The Clanton Gang (Table of Contents: 3)

Grey Wolf and the Sacred Ruby of Amad-Re (Table of Contents: 4)

Originally credited to Manny Stallman? this way : "Unsigned but the art resembles the previous signed story. Art credited to Stephen Kirkel in index of reprint."
The artwork is neither of these. It is Henry Kiefer, and that is very clear when looking at the faces with broad mouth and marked lower lips, and the squinting eyes. None of his figures ever focused their eyes, and none made faces more ugly. That is the best clue to Kiefer. He worked on many Classics Illustrated: Twenty Thousand Leagues Under the Sea, to mention only one. Art ID by Steinar Ådland December 2010.