On-sale date from The Comic Reader #93, January 1973.
This issue has variants:

They Call Him -- Killraven! (Table of Contents)

Per Nick Caputo review of the art, the ink credits should be John Romita not Mike Esposito, who Marvel has credited in reprints. Letters credit from Marvel Comics Index No. 8B by George Olshevsky. 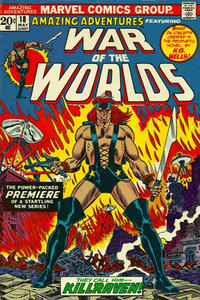 The War of the Worlds! (Table of Contents: 1)

War of the Words (Table of Contents: 2)

Amazing Mails
Genre
superhero
Synopsis
Describes the creative process that led to the Killraven story. No letters this issue.
Reprints