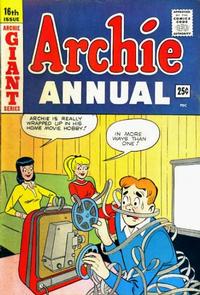 The title has misspelled words with the wrong letters marked with a slash and the proper ones written above.

The Rain Caper! (Table of Contents: 3)

Genre
humor; teen
Characters
Archie Andrews; Veronica Lodge; Betty Cooper
Synopsis
Veronica sends Archie to pick up a package. It starts to rain so Archie backs up to the house and hits the downspout, causing the water to spill into Archie's car. When Archie opens the car door, all the water spills on Veronica.
Reprints
Keywords
downspout; hospital; rain; thunderstorm; umbrella

Genre
humor; teen
Characters
Archie Andrews; Veronica Lodge; Reggie Mantle; Pop Tate; Gary; Mugs
Synopsis
A couple of little wise guys insult Archie and get him in trouble with Veronica. It turns out the kids were put up to the task by Reggie, so Archie pays them to get Reggie in trouble.
Reprints
Keywords
insults

Genre
humor; teen
Characters
Archie Andrews; Betty Cooper; Veronica Lodge; Sugar Jones
Synopsis
Archie has a job setting up umbrellas at the beach. He gets in trouble with both Betty and Veronica and another girl's boyfriend.
Reprints
Keywords
beach; black eyes; jealousy; umbrellas

First prize of $5.00 to Dennis Satterfield (Reseda, Calif.) for article on matches. Second prize of $3.00 to Susan Lacoff (Brooklyn, N.Y.) for one long joke. Third prize of $2.00 to Gregory Putz (Santa Barbara, Calif) for three jokes.

Genre
humor; teen
Characters
Archie Andrews; Reggie Mantle; Jughead Jones; Betty Cooper; Veronica Lodge; Mr. Lodge; Smithers
Synopsis
The newest fad is frying marbles. They are heated on the stove, then dumped into cold water which makes them cracked and sparkly and suitable for making jewelry. When Archie runs out of marbles, he manages to mistake a box of special vitamin balls made for Mr. Lodge's polo pony as a box of marbles.
Reprints
Keywords
fad; frying pan; jewelry; marbles

First Line of Dialogue or Text
I started the backwards fad!
Feature Logo

Born to Bungle (Table of Contents: 17)

Genre
humor; teen
Characters
Archie Andrews; Veronica Lodge; Mr. Lodge; Betty Cooper; Jughead Jones
Synopsis
When Veronica is alone in the house, she sees a man lurking in the bushes. Grabbing a croquet mallet, she goes to investigate, only to find it is her father, waiting to make sure that Archie has left. However, Archie manages to cause trouble for Mr. Lodge even when he's not there.
Reprints
Keywords
croquet mallet; electric motor; pay phone; prowler; telephone

Make That Grade! (Table of Contents: 18)

First Line of Dialogue or Text
Professor J.J. Eghedd says the modern teenager is a very poor student! Hmmm...
Genre
humor; teen
Characters
Archie Andrews; Fred Andrews; Mary Andrews
Synopsis
Archie's father finds a report card on the table and is upset at how poor the grades are. He starts to yell at Archie, but is interrupted by his wife, who informs him the report card is an old one of his that she found in the attic.
Reprints
Keywords
cigarette lighter; report cards

Tale of the Tiger (Table of Contents: 20)