Music Shop has records by the Archies, the Bingoes, the Ma-Ads, and Dylan. 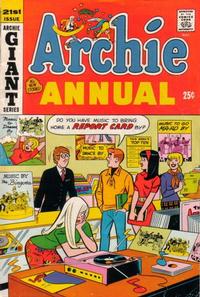 Tippecanoe and Jughead, Too! (Table of Contents: 1)

Ladder of Success (Table of Contents: 2)

Be Seated (Table of Contents: 4)

The Gift (Table of Contents: 5)

Big Moose is discussed, but does not appear.

The dog in this story is "Noname," who had been tried out in a few earlier stories as a possible dog for Archie but was dropped before this story was published. All references to his name have been re-lettered.

Betty says that "Frank" could write a TV tearjerker based on this material, referring to this story's writer, Frank Doyle.

Halls of Ivory (Table of Contents: 15)

Feature title is Big Moose, but the character is called Moose in the story.