The title contracts from 68 to 52 pages starting with this issue. 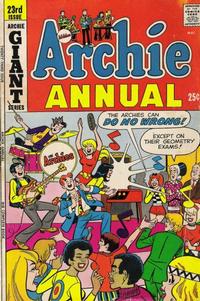 The Inferior Decorator (Table of Contents: 1)

Genre
humor; teen
Characters
The Archies [Archie Andrews; Jughead Jones; Betty Cooper; Veronica Lodge; Reggie Mantle]; Hiram Lodge; Smithers; Leslie
Synopsis
The Archies are hired to provide some up-to-date entertainment for one of Mr. Lodge's parties, but on the orders of the flamboyant interior decorator Mrs. Lodge hired, they are forced to wear ridiculously flashy mod outfits that make them unable to play their best.
Reprints

Dash for Cash (Table of Contents: 2)

Come Fly With Me (Table of Contents: 4)

Mister Lodge
Genre
humor; teen
Characters
Archie Andrews; Mr. Lodge; Veronica Lodge
Synopsis
Mr. Lodge wants to watch a broadcast of a speech he gave, but his TV is in the shop. The only set left is Veronica's small black-and-white TV, which only works when her Siamese cat, Pam Pam, is sitting on top of it.

The sudden appearance of a cat for Veronica is typical of Bolling, who tried to give characters a cat whenever possible.

Page one is a contest for a $100 cash prize offered by Archie Comics.

Dishing It Out (Table of Contents: 8)

Genre
children
Characters
Li'l Jinx; Gigi
Synopsis
Li'l Jinx tells Gigi what she made for dinner the night before.

Staying In School (Table of Contents: 11)

Archie and Jughead
Genre
humor; teen
Characters
Archie Andrews; Jughead Jones
Synopsis
Archie and Jughead explain to a bearded high school dropout that staying in school offers more freedom and excitement than dropping out and doing your own thing.

Miss Grundy [all caps]
Genre
humor; teen
Characters
Geraldine Grundy; Betty Cooper; Veronica Lodge; Moose Mason; Waldo Weatherbee
Synopsis
Miss Grundy tries everything she can think of to get Betty and Veronica to talk about something other than boys. But no matter how distant the subject is, they somehow manage to use it as an excuse to talk about boys.