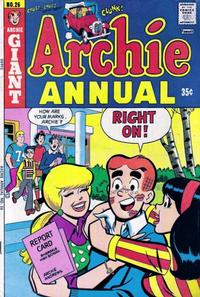 Tired of It All (Table of Contents: 1)

Food for Thought (Table of Contents: 2)

The Callers (Table of Contents: 3)

Genre
humor; teen
Characters
Archie Andrews; Fred Andrews; Mary Andrews
Synopsis
Mary makes Fred help her clean up the house on the off-chance that The Graingers may stop by.
Reprints

From the sound of the dialogue coming from the television, Fred was watching Gunsmoke.

Quiet on the Set (Table of Contents: 7)

In the 2015 reprint, Doyle is credited as writer, and either Lucey or Vince DeCarlo are credited in separate credit listings as inker.

Chivalry Is Dead (Table of Contents: 9)