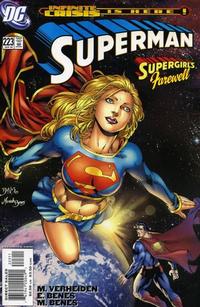 Genre
superhero
Characters
Superman [Kal-El; Clark Kent]; Supergirl [Kara Zor-El]; Talia al Ghul; Blackrock [Lucia]; Ned the Superman Robot (destroyed); Wonder Woman (flashback, cameo); Max Lord (flashback, cameo); Lex Luthor (cameo)
Synopsis
Superman visits his Amazon Fortress, and has a discussion with Supergirl about her joining Donna Troy in space. Talia visits Lucia in her Peruvian prison, and gives her the Blackrock. She escapes prison, drawing the attention of Superman and Supergirl. She incapacitates Superman, and follows Supergirl to the Fortress. Supergirl manages to defeat her, but she disappears in an explosion. We find out that Luthor had Talia give her the Blackrock.
Reprints
Keywords
Amazon Fortress of Solitude; Peru

"Special thanks to Ricardo Riamonde & Ronaldo Barata". Supergirl states she is 16 in this story.