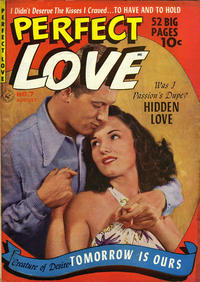 Tomorrow Is Ours (Table of Contents: 2)

Genre
romance
Characters
Pete Travis; Tony Ross; Anne
Synopsis
Anne is engaged to Pete, a “sandhog” (tunnel worker) who is studying to become a supervisor. Bored, Anne starts dating Pete’s roommate Tony. When Pete finds out, he breaks up with her, and Tony also dumps Anne because he only wanted “some fun.” Pete is promoted. He enters a tunnel after a cave-in to rescue the trapped Tony for Anne’s sake. When the two men emerge, Anne says it is Pete she loves and they reconcile.
Reprints

The Wedding Dress (Table of Contents: 3)

Genre
romance
Characters
Meg; Tom Gale; Virginia Tabor (Meg's grandma); Seth Tabor (Virginia's husband)
Synopsis
Meg and Tom are young, passionately in love and planning to marry. Then he joins the army to fight in Korea. Meg wants to marry immediately, but Tom says they should wait. Months later, the news comes that Tom is wounded. He returns crippled and changed, affected by what he's been through. Tom breaks up with Meg, saying she needs someone who will be a husband, not a burden, but Meg loves him and doesn't care. It takes Meg's Grandma telling the story of her own wounded husband and long marriage to convince Tom to change his mind.
Reprints

First Line of Dialogue or Text
I haven't a bit of room in my clothes closet, dear.
Genre
humor

To Have and to Hold (Table of Contents: 6)

Genre
romance
Characters
Hal; Kathy; Doctor Kenton; 'Old man Morse'; Judy
Synopsis
Former mechanic Hal is recently graduated as a doctor when his fiance Kathy turns up with burst appendix. With other doctors away, Hal must operate but Kathy dies. Hal abandons medicine and becomes a mechanic with a traveling carnival. A year on, Judy falls for Hal and, when a man tries to rape her, he intervenes. Judy is hit by a bullet intended in revenge for Hal, and he must again operate on a woman he loves. The operation is a success and, after the wedding, he returns to being a doctor.
Reprints

Genre
romance
Characters
Slugger Keyes; Ellen Keyes; Ronald "Rocky" Steele; Mike
Synopsis
Washed-up boxer Slugger takes on Rocky as his protege. Rocky falls for Slugger’s daughter Ellen, but she is jealous of his rapport with her father. To ruin his career, she tells Rocky she’ll marry him if he makes a lot of money, so he goes against Slugger’s advice and accepts too many bouts. Rocky learns her scheme and leaves. When Ellen sees him later, she apologises and says she loves him regardless. Rocky wins his last fight,retires from boxing, buys a gas station, and will marry Ellen.
Reprints
Keywords
boxing

Deadline for Love (Table of Contents: 8)