First Line of Dialogue or Text
I'm a Smiling Sack 'cause these are some of my funniest moments!
Genre
humor; military
Characters
Sad Sack

Includes small and partially-obscured reprints of the covers to Sad Sack #1 and #2 as The Sack peels a huge pile of potatoes. 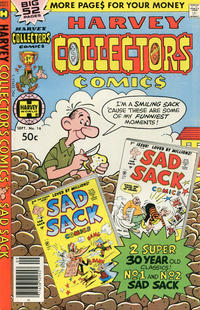 Genre
humor; military
Characters
Sad Sack; Policeman
Synopsis
Sad Sack obeys several traffic signals and signs which delay his crossing the street; because of this, he is arrested for loitering.
Reprints

Day at the Beach (Table of Contents: 6)

Genre
humor; military
Characters
Sad Sack; children; Large Man on the Beach; Policeman
Synopsis
Sad Sack is a hot dog vendor at the beach and puts down his hot dog basket to call out his wares (pantomimed; only sound effects and signs are lettered). While he looks around, playing children kick sand in the basket and he soon sells a sandy hot dog to a large man on the beach. Eating the ruined hot dog, the customer becomes irate and smashes the hot dog basket over Sack's head. Walking away in dismay, Sad Sack is grabbed from behind by a policeman who arrests him for littering.
Reprints

Genre
humor; children; military
Characters
Sad Sack; two children
Synopsis
The Sack sees two boys playing with toy guns. As they shoot him, he plays dead - and continues to play dead as they carry him to the pier. By the time he realizes they are throwing him into the water, it is too late.
Reprints

Genre
humor; sports; military
Characters
Sad Sack; baseball coach; baseball players; umpire
Synopsis
The Sad Sack is a baseball player who is surprised when the coach puts him in the game. He gets a hit and advances to base. When he tries to steal home, the batter hits the ball into Sad Sack, which forces him backward into the arms of the third baseman, who catches both Sack and the ball. The umpire declares Sack out.
Reprints
Keywords
baseball; umpire

The Sad Sack Visits the Zoo (Table of Contents: 9)

The Sad Sack Goes to the Movies (Table of Contents: 13)

Genre
humor; romance; teen
Characters
Winnie; Maisie; Ted; Winnie's unidentified date
Synopsis
Maisie is afraid she is losing her boyfriend and is reluctant to go on a horseback riding date for fear of bad horseback skills. After encouragement by Winnie, she goes on the date and is impressive on horseback. Later, she reveals to Winnie that she used glue to affix herself to the saddle.
Reprints
Keywords
boyfriends; glue; horseback; waitress

This is the civilian version of Winnie the W.A.C., also by Vic Herman, who was a noted commercial artist, magazine cartoonist, and Little Dot artist.

First Line of Dialogue or Text
Baby De Murph, society heiress, has been kidnapped!
Genre
humor; detective-mystery
Characters
Snoopy; criminals; butler; rich mother of kidnapped baby
Synopsis
Snoopy hears of the kidnapping of an heiress child over the radio and forcefully delivers his terms to the underworld - that he wants to know the whereabouts of the child. When he informs the mother of Baby De Murph that her child has been located and can be freed for $250,000, she is dismayed that the baby's value to the criminals is insufficient to the family's worth and may damage their reputation.
Reprints
Keywords
criminals; detective; kidnappers; radio

This "Snoopy" is not the famous beagle (he would debut, unnamed, in Peanuts Oct. 4, 1950) but a human character who is a plainclothes policeman.

First Line of Dialogue or Text
Police parade or no police parade...yer on duty!
Genre
humor; detective-mystery
Characters
Snoopy; Police Chief; policeman; Snoopy's dog; parade attendees
Synopsis
Snoopy disobeys the Police Chief and attends the Police Parade. Snoopy is removed from the parade by an officer because his dog does not have a license tag; Snoopy reveals he is wearing the dog tag with his police medals.
Reprints
Keywords
dog; parade; police

bottom of the same page as the other Snoopy story.

Genre
humor; military
Characters
Sad Sack; Lady milk company customer
Synopsis
Sad Sack walks up eight flights of stairs to deliver milk only to see a note that no delivery is needed; after he gets back to the ground, the customer calls him back up the stairs to collect an empty milk bottle.
Reprints

Sad Sack, dressed as an American Indian, wears a sandwich board which advertises "Eat at Indian Joe's Fine Food". Two children, dressed as cowboys, chase him with their dog and shoot him with water pistols.

Sad Sack in various jobs and scenarios. Some signed by George Baker.

Sad Sack in different scenarios; three of the stories signed by George Baker. All pantomime.

Better Known as The Flyin' Fool (Table of Contents: 22)

Genre
humor; aviation
Characters
Chickie Ricks; Gootch; Penny; Grandpop
Synopsis
Penny's Grandpop takes off in a biplane and must be rescued by Chickie and Gootch.
Reprints

Reprinted from Sad Sack #2, but probably appeared prior to that in Joe Palooka c. 1947.