Some information for this index from Saltarella via the GCD Error Tracker, August 2010.
On-sale date is publication date in Catalog of Copyright Entries, 1952 Periodicals, page 143

Quest of the Chlorophyl Monsters (Table of Contents) 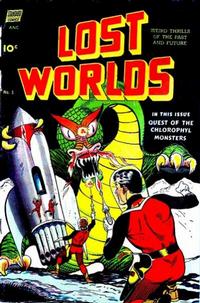 The City That Escaped from Tomorrow (Table of Contents: 2)

Visitors from Space (Table of Contents: 5)

The Quest of the Chlorophyl Monsters (Table of Contents: 6)

Art credits per notes on original art. Another undecipherable name is listed under pencils.

The Man Who Didn't Know Venus (Table of Contents: 7)

Alice in Terrorland (Table of Contents: 10)

In Genius, Isolated: The Life and Art of Alex Toth (IDW, 2011 series) (April 2011), the inks for this story are credited to John Celardo.
The original art has Toth's name and address in the upper left corner. It also has notations that the pencils were turned in on 9 May 1952, then the lettering that same day, with the inks turned in on 16 May 1952. Toth provides lettering instructions for the story's title to "Herb".