Title was originally intended to be "Love Letters." This title appears on the indicia, on the back cover house ad (with an image of the original cover), and on the mailing address given for reader letters to "Doris Bigelow."
This issue has variants:

Title was originally to be "Love Letters" but Quality Comics secured right to the title first, but Harvey was evidently not aware until the comic had been printed. Harvey's solution was to overprint the masthead on the existing comics with silver ink to obscure "Letters" and then added "Lessons" in red ink on top of the silver. Two slightly different cover variants exist. 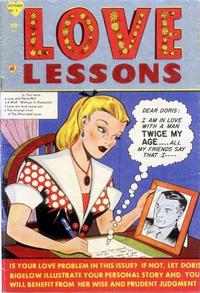 [Do You Have a Personal Problem?] (Table of Contents: 2)

June and December (Table of Contents: 3)

Genre
romance
Characters
Doris Bigelow; June Norris; Babs; Nancy Baxter; Don Baxter; Dick Rogers; Bill; Lank Edwards
Synopsis
June saves her money for two years for a vacation at the Lake Placid Country Club, hoping to find a rich husband. She meets middle-aged widower Don who is “more than twice your age!” and they are married. Don asks June to speak to his grown daughter Nancy about the late hours she’s been keeping. To keep an eye on Nancy, June accompanies her to a club and is paired with Lank, who makes a pass at her. Nancy threatens to tell Don. June leaves but Nancy tracks her down and apologises. She says Don had full trust in her, and June and Don reconcile.

A Wolf Without a Sheepskin! (Table of Contents: 4)

Genre
romance
Characters
Doris Bigelow; Danny Devan; Jean Watson Devan; Mrs. Devan; Joe Devan
Synopsis
High school students Danny and Jean fall in love. His father left his mother because he never finished school and Mrs. Devan did and constantly proclaimed her greater intelligence. Danny says he’ll marry Jean if she drops out of school after her junior year (he graduates). She does so, and they are wed. However, Jean secretly studies on her own and submits a slogan to the ad agency where Danny works, under his name. Danny wins a promotion but is angry at Jean. However, when she decides to leave him, Danny apologizes and promises to change.

Genre
romance
Characters
Doris Bigelow; Francois Dubois; Sue Sanford; Jerry; Russ Randolph; Grace
Synopsis
Russ rescues fellow cruise passenger Sue from a masher and they become friends. His friend Jerry tells Sue that Russ is a “millionaire oil man.” When the cruise is over, Sue waits to hear from Russ but he never calls. She accidentally runs into Russ at the gas station he owns. Russ explains that when he learned of Jerry’s joke about him being a millionaire, he was ashamed to call Sue. Sue says it doesn’t matter because she loves Russ.

The Strange Case of the Wounded Lover! (Table of Contents: 7)

Genre
romance
Characters
Doris Bigelow; Meg Mitchell; Paul; Doc Enright; Eve Enright; Mrs. Mitchell
Synopsis
Paul returns from the war to his sweetheart Meg, but he acts oddly and she becomes jealous and suspicious. Paul tells Doc Enright that a leg wound means he can’t go back to his old job at the post office, and he doesn’t want to “burden Meg with being married to a cripple!” Enright straightens everything out, Paul gets a new job, and he and Meg will wed.
Reprints
Keywords
disabled veteran

Famous Love Affairs of the Past... Ninon De Lenclos (Table of Contents: 8)

Genre
non-fiction; biography; historical; romance
Characters
Ninon de Lenclos; Chevalier De Saint; Richelieu
Synopsis
Ninon, born in 1620, has many lovers in her life, but she doesn’t marry until she’s 80 years old, to a man 50 years younger. She dies in 1705.
Reprints

The final panel says "five years later, in 1706" Ninon dies, despite the fact that the previous panel indicated she got married in 1700 (and thus "five years later" would be 1705). The real-life Ninon de Lenclos did die in 1705.

A Bit of Womanly Intrigue (Table of Contents: 9)

Inside back cover, black and white.