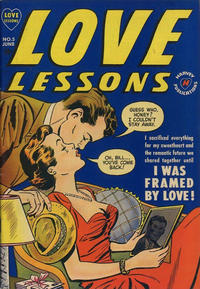 Very Personally Yours (Table of Contents: 1)

Genre
romance
Characters
Doris Bigelow; Effie; Margery Brandt
Synopsis
Margery visits the office of Doris Bigelow, the love advisor for "Love Lessons." Doris thanks Margery for allowing her story to be used as the basis for "I Played a Dangerous Game" in this issue, and urges readers to send in their personal tales of romance.
Reprints

Framed by Love! (Table of Contents: 2)

Genre
romance
Characters
Jo Treemont; Beth Treemont; Grant Farnham; Mr. Treemont; Mrs. Treemont; Vivian Barnett; Doris Bigelow
Synopsis
Jo falls in love with impoverished artist Grant. Although her younger sister Beth and her parents are opposed to their relationship, Jo marries him anyway. To help make ends meet, Jo gets a job and Grant teaches in an art school. Jo becomes jealous of Grant's model Vivian and leaves him. She later reads about Grant's one-man show and a portrait called "My Only Love." It's of Jo, and Grant and Jo reconcile.
Reprints

Genre
romance
Characters
Doris Bigelow; Dotty Camfield; Dennis Kane; Peter; Mrs. Forrestal; Mrs. Camfield; Reggie
Synopsis
Student Dotty works frantically in her free time to save $49 for a hat she desires, ignoring her boyfriend Peter in the process. Her earnestness impresses Dennis, son of the store owner, and they fall in love. She gets the hat and other clothes free.
Reprints

This does not appear in the online scanned version at: http://comicbookplus.com/?dlid=67672
Online version is missing the centrefold (4 pages total).

Online copy is missing the centrefold. Previous indexer listed two instances of "Letters of Love" and "Love Laughs," but only one of each appears in the scanned version.

This does not appear in the online scanned version at: http://comicbookplus.com/?dlid=67672

(Only one "Letters of Love" is in this issue as scanned)

I Played a Dangerous Game (Table of Contents: 7)

First Line of Dialogue or Text
Darling: It's been four weeks since I last heard from you.
Genre
romance
Synopsis
Text story in the form of letters between a man and a woman.
Reprints

Vertical format, left-hand side of page.

First Line of Dialogue or Text
Paul: So you and Susan are going to be married.
Genre
humor
Reprints

Has single panel cartoon and text jokes. Vertical format, right-hand side of page.

Genre
romance
Characters
Gary; Vivian Wooster; Doris Bigelow; Florence
Synopsis
Gary is Vivian's boyfriend. Although she has black hair, he admires women with blonde hair: "They please my sense of beauty." Vivian wonders if he can be faithful to her, so she attends a masquerade ball wearing a blonde wig and a mask. At the ball, Gary makes a pass at Vivian and says he loves her. She runs away angrily but Gary catches up and admits he knew it was her all the time. He asks her to marry him.
Reprints

First Line of Dialogue or Text
Dear Doris: I am a girl of 18 years
Synopsis
Letters to Doris Bigelow and her advice in the replies.