Indexed from scanned copy with torn front cover and first couple of pages. No indicia or issue number on cover. Issue number assumed from various sources. 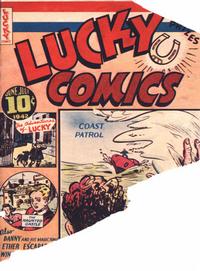 Script
? [as The Man With The Happy Family]
Pencils
?
Inks
?
Letters
Typeset

Synopsis
Short letter from "The Man With The Happy Family" on how great this issue is and some interesting facts. Bottom half of page is ballot to fill out to say which story you liked the best.

Second panel of story is signed "Ted Watson", later panel is signed "Bert Bushell". Possible that Ted Watson is the writer, also possible he simply drew the second panel (which appears a little different that others in the story).

Peter and Peggy and the Haunted Castle: Chapter 8 (Table of Contents: 4)

Genre
adventure
Characters
Peter; Peggy; Mr. Jeffries; Jabez
Synopsis
Peter goes back to the castle through a secret passage and Mrs. Scallop goes after a sleeping Peggy with a sword.

To be continued in the next issue "Chapter 9: The Mystery of the Great Sword".

First Line of Dialogue or Text
Danny is a bright young lad who was given a ring by a mysterious man...
Genre
fantasy-supernatural
Characters
Danny; The Genie
Synopsis
Danny explores the haunted house on Hector's Hill and finds gangsters. He summons the Genie to help him capture the men by producing a group of policemen.

Conclusion: Wings Over the Lion's Gate (Table of Contents: 6)

Genre
adventure
Characters
Ginger
Synopsis
Ginger's parachute gets stuck in a tree and he is accidentally shot down out of it.

Suggest a Name for this Cartoon and Win a Prize (Table of Contents: 7)

Synopsis
Cartoon of humourous activities around a water's edge.

Prize Winners from Every Part of Canada!!! (Table of Contents: 8)

The Creeping Tank (Table of Contents: 10)

Synopsis
Instructions on how to build a toy tank from an empty thread spool. Also includes an announcement to buy war bonds to buy tanks for the British Army.

The Mission's Secret (Table of Contents: 11)

First Line of Dialogue or Text
Midnight, and the steamer Highlander was off the coast of Scotland...
Genre
non-fiction
Characters
George Anderson