The on-sale date is the publication date reported in the U. S. Copyright Office filing. Given on-sale date of December 16 in house ad in Star Spangled Comics #17. 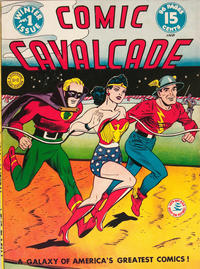 Boys and Girls (Table of Contents: 2)

[The Mystery of the House of Seven Gables] (Table of Contents: 3)

Genre
superhero
Characters
Wonder Woman [Diana Prince]; Steve Trevor; Etta Candy; Tommy Royden (introduction); Mrs. Royden (Tommy's mother, introduction); Nazi soldiers and spies [Kipp; Anton; Fritz; rest unnamed] (villains, introduction for all)
Synopsis
Diana and Steve head out by car to the New England coast at General Darnell's request to keep an eye out for spies and saboteurs. The disappearance of a young boy named Tommy then leads Diana to try and locate him, and she discovers a group of 5th Columnists who are connected to the Nazis that are to come ashore as invaders. Wonder Woman, aided by Steve and Etta Candy, put a stop to the invasion and rescue the boy.
Reprints
Keywords
House of Seven Gables; Magic Lasso; U-Boat

Louder and Funnier As the Years Go On! (Table of Contents: 5) (Expand) /

Genre
adventure
Characters
Red Dugan; Whitey Smith; Blooey Blue; Doris West; unnamed Fire Chief; unnamed Street cleaner (death); Sherm (G2 chemist); unnamed G2 building superintendent; unnamed G2 clerk; Truck Bieler (villain); Rusty (villain, Bieler's accomplice); Professor Leaman (villain)
Synopsis
Red Dugan and Doris are walking along the street when a fire truck races by them, and they follow it to the fire. Checking the building over with an arson investigator, they discover a body in the rubble, and gas tanks. Red picks up a badge at the scene and investigates how it could have gotten there. With the help of Whitey and Blooey, they discover a plot by someone to use a peculiar gas to make the writing on important government documents disappear, then steal them to obtain the secrets.
Reprints
Keywords
Litho-Ruthenium-Hydro-Alcohol (a gas)

Per Kevin Wilkens, the story was edited from its original format in All Star Comics #2 to reflect changing editorial policies to remove all direct or indirect references to swearing, provocative clothing, and a dead body.

First Line of Dialogue or Text
If Columbus had followed his original course...
Genre
non-fiction
Characters
Christopher Columbus
Synopsis
Fact page on Columbus, which provides info plus illustrates the flag of old Spain and the personal colors of Columbus.
Reprints
Keywords
San Salvador

Genre
war
Characters
The Ghost Patrol [Pedro; Slim; Fred]; Several newspapermen [Hans; Fritz]; Adolf Hitler (villain); the Nazis (villains, introduction for all)
Synopsis
While in Germany, the members of the Ghost Patrol fight to save the "freedom of the press" in that nation by challenging the Führer himself!
Reprints
Keywords
Freedom Press; Germany

Genre
aviation
Characters
Hop Harrigan; Tank Tinker; Japanese soldiers (villains, some die)
Synopsis
Hop and Tank are flying along near the Himalayan Mountains when a Japanese fighter suddenly zooms out after them...then mysteriously disappears. Landing, Hop discovers all the mountains in that area are made of rock salt, and that the lake at the bottom of those mountains was so full of salt that its water could support the weight of the Japanese plane that came after them! So they don parachutes and descend to the lake itself, and walk ashore where they discover a hidden, secret Japanese aircraft hanger!
Reprints
Keywords
Himalayan Mountains

Fingers of Fate (Table of Contents: 13)

Genre
adventure; humor
Characters
Kalua [Hazel Dearie]; Commander Nosabi [Ralph McSneer]; Lt. Charles Dangerfield [Dick Dare]; Sgt. Tim McGruff [Fuller Phun]; Gen. John March [Andrew Handy]
Synopsis
Lt. Dangerfield is back in Australia having been rescued from a tiny South Sea isle, where he met Kalua, his fiancee. He brought back a Japanese cruiser commander, who he turns over to Sgt. McGruff while the Lieutenant told his story to the General. Dangerfield's bailed out over the isle, and rescued by Kalua. Later the natives think he was some sort of god and put him on a throne as their leader. Later, he tended to his signal fire, and noticed a raft approaching and on it was the Japanese cruiser commander, who he took into custody. He was rescued and the General agreesto him marrying Kalua.
Reprints
Keywords
Australia

Interesting stories of fabricated "personalities" of the day.

The Scourge of the Seas (Table of Contents: 15)

Genre
historical
Characters
The Black Pirate [Jon Valor]; Justin Valor (his son); Donna Bonita; Virginia; Queen Bess [Elizabeth]; Thomas (a British sailor, introduction); the Spaniards (villains, introduction for all)
Synopsis
The Black Pirate and son Justin are walking along the beach when an English ship, unable to come ashore, fires a cannonball message to them, stating that the good Queen Bess needs their help immediately. Before they can see the Queen, they are told of a huge sea monster that has been causing havoc, so the duo agree to seek out the beast and destroy it.
Reprints

[The Adventure of "Luckless" Lenore] (Table of Contents: 16)

Genre
superhero
Characters
Green Lantern [Alan Scott]; Doiby Dickles; Irene Miller; Lenore Lowell (introduction); Doon [J Dinwiddie Lowell] (villain, introduction); Doon's men [Midge; Tuffy; rest unnamed] (villains, introduction for all)
Synopsis
Doiby is asked by a young lady for three autographs of his, which she will use to obtain one autograph of the Green Lantern. Investigating, the Emerald Crusader discovers that this woman's life is in real danger, and has been ever since she was born...from her own Uncle!
Reprints

Alan Scott works for Apex Studios in this issue. Green Lantern recites an unusual oath, used in this story only: "Let all power and triumph be mine, in whatever right I do." Doiby appears in a Green Lantern costume in the splash only.

Be Sure to Get These Top Favorites for the Best in Comics! (Table of Contents: 17) (Expand) /

Genre
adventure
Characters
Tom Marlow; Joe Talbot; Jeff Minstro (villain)
Synopsis
Tom Marlow, a blacksmith in Gallway, had a brother-in-law, Joe Talbot, who believed that a fellow named Jeff Minstro had shot Tom's father, the town Sheriff, in the back during a riot, killing him. However, Joe was worried that Jeff would get off because seven of the jury members were Jeff's kinfolk. And free he did go. Tom knew that Jeff was guilty, but figured that fate or the law of averages would catch up with this guilty man. And it did.
Reprints

Who's Who gives "Jay Marr" as a penname for Jack Miller.

First Line of Dialogue or Text
Oboy! Home at last!!
Genre
humor
Characters
Scribbly Jibbet; Mrs. Jibbet (Scribbly's mother); Daphne; Sylvester
Synopsis
Scribbly returns home and decides to go and see his love interest, Daphne. Getting her candy and flowers, he sees her with Sylvester, who is decked out in his military uniform. Dejected, Scribbly is asked to attend a party by some friends: a party where he could meet girls, so he goes. Daphne is there with Sylvester, who is the center of attention. Scribbly gets mad and decides to have it out with Sylvester, and gets a black eye! His friends set a trap for Sylvester and gives Scribbly some tomatoes to throw at Sylvester...and throw them he does, then scatters for parts unknown.
Reprints

The bottom of pages 2-4 have a series of one panel cartoons titled "Why Big Brudders Leave Home", written, illustrated and lettered by Sheldon Mayer (under the name "Scribbly").

Genre
superhero
Characters
The Flash [Jay Garrick]; Joan Williams; District Attorney Morgan (introduction); Officer Kelley (introduction); Horseface (villain, introduction); Horseface's gang [Bats; rest unnamed] (villain, introduction for all)
Synopsis
Horseface tells his muggs that he plans to celebrate the D.A.'s birthday by turning himself in. In coming days, more "birthday" presents are delivered to the Police, baffling everyone. The D.A. and Jay Garrick are suspicious, so Flash notes that some of those presents present some major headaches to the law. Horseface's aim is to keep the Police on wild goose chases while his thugs clean out the town. Flash finally figures out what Horseface is up to and surprises him on his last job before he splits town. Horseface is captured and jailed...on his birthday, of all days.
Reprints