On-sale date from Everything's Archie #151.
This issue has variants:

Time for a Change (Table of Contents) 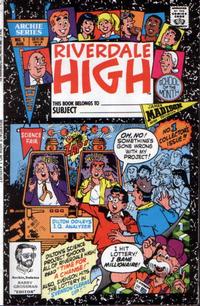 Meet the Cast of Riverdale High (Table of Contents: 2)

Headshots of the cast of characters.

Story is in two parts. The word balloons for the switched characters have a headshot of the personality speaking, so readers don't get confused by the switched personalities.

Time for a Change (Part II) (Table of Contents: 9)

The issue is dedicated to James Madison High School, Brooklyn N.Y., whose alumni include Barry Grossman. Reader input is requested and there is a promo for Riverdale High #2.

It's the Sign of the Times (Table of Contents: 17)

One large drawing, as opposed to others in this campaign which have several panels.

Svenson Cleans Up (Table of Contents: 22)