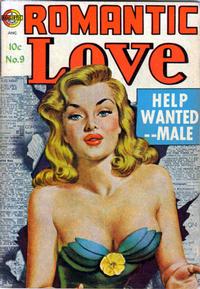 No Time for Love (Table of Contents: 2)

Genre
romance
Characters
Paul Bramson; Viv Hanley; Vincent Lanthrop; Edith Lanthrop; Mark Goodson; Joe
Synopsis
Agent Viv discovers her best author “Gloria Dare” is actually a man, Paul. He visits the city and he and Viv fall in love. Paul, an engineer, is offered a job by Lanthrop, whose daughter Edith is Paul’s old girlfriend. Viv is jealous, and when a publisher gets a “Gloria Dare” story that mocks Viv’s romance with Paul, she is heartbroken. Paul explains that Edith changed the story and sent it in to break up Viv and Paul, but it didn’t work: they love each other.

Viv makes a reference to a "contract with Avon Periodicals."

Genre
romance
Characters
Dolly Duff; Bob Holloway; Mrs. Duff
Synopsis
Dolly and her middle-aged mother perform as a duo, even though her mother is past her prime. Dolly falls in love with serviceman Bob and wants to quit the act, but this will leave her mother all alone. Dolly breaks up with Bob. However, on the next night, Dolly’s mother has a fatal heart attack and dies on stage. Bob and Dolly can now marry.

We Met Too Late (Table of Contents: 4)

Genre
romance
Characters
Art Greeley; Nancy Benton; Fred Benton
Synopsis
Art and Nancy are in love but his Army Reserve unit is recalled to active duty in the Korean War. Nancy doesn’t get any letters from him and thinks he’s lost interest. She dates Fred and they fall in love and get married. A short time later, Art shows up: he was a prisoner of war and couldn’t write. Nancy is conflicted. Fred comes home and nearly fights with Art until they discover he’s a captain in Art’s division. Nancy decides Art was just an infatuation and she stays with Fred.
Keywords
Korean War

Art's last name is spelled both "Greely" and "Greeley" on page 1.

It is not explained how Fred can be a captain in Art's Army division and yet was not called up to fight in Korea when Art was.

I Had Everything But Love (Table of Contents: 5)

Genre
romance
Characters
Betty [Jones] Marnay; Steve Randell; Lawrence James; C.T.; May; Jim Clayton; Theodore Barret
Synopsis
Betty is a glamourous movie star but has no love in her life until she meets rancher Steve. They decide to get married, but Betty learns Steve is already married. She is disillusioned but Steve shows up and says he’s Steve Jr.; his father is one who already has a wife.

Steve is called "Steve Renfrew" on page 1 but "Steve Randell" after that.