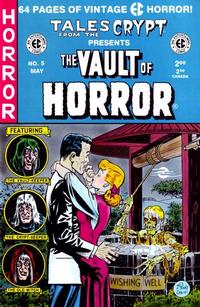 Genre
horror-suspense
Characters
The Vault-Keeper [cameos]; Aldous Barstow; Rick Hudson
Synopsis
A lonely woman, who had joined a lonely hearts club, accepts a marriage proposal by mail, but when she meets him, he is actually much older than she realizes. After she meets the new area health inspector, Rick Hudson, and falls for him, she murders her husband and dumps him into the well on their property so she can carry on a romance with Hudson. Then she discovers that Hudson is married and leaving town.....disappointed beyond hope, she goes over to well to draw some water to quench her mounting thirst....and gets a REAL surprise!
Reprints

Genre
horror-suspense
Characters
The Crypt-Keepers [cameos]; Dr. Harold Johnson
Synopsis
Emminent physician Dr. Johnson is the victim of a car accident and loses his hand, which means his career if finished. After reading an article in a medical journal about keeping tissue alive by a chemical and mechanical apparatus, the doctor decides to kill a drunk to get a hand to replace the one he lost.....with some very unfortunate results!
Reprints

Genre
horror-suspense
Characters
Inspector Mattern
Synopsis
Inspector Mattern and his assistant, Sergeant Finch, were working homicide detail concerning four murders that had occured under a full moon in the previous four months. They laid a trap for the killer, which appeared to be some kind of wild animal. As Mittern sat waiting to spring the trap he lost consciousness. When he awoke, he discovered Sgt. Finch was lying atop him, with a slashed throat and wounds that appeared to be that of a werewolf! Then he noticed his hairy hands were covered in blood....and realized that the trap he had set had worked and had caught the killer werewolf...himself!
Reprints
Keywords
monsters

Has a spot illustration.

The Mask of Horror (Table of Contents: 5)

Genre
horror-suspense
Characters
The Vault-Keeper [cameo]; Ken Anders
Synopsis
Ken Anders stops off at an eerie costume shop to get a costume for a party, and the weird owner outfits him with a mask and costume that is supposed to represent his true self. Opening the box upon reaching home, he discovers the costume of a rotting corpse inside. Donning only the costume, he goes over to his fiancee's house, but she begs off because of a headache....so he leaves, but then discovers he left the box with the mask inside at her house. When he returns, she is in the arms of another man....so he leaves devastated. He puts the mask on and heads to the party, and meets a woman dressed as a vampire and falls for her. They head into the garden to unmask and he discovers she really IS a vampire, who then attacks him. Anders drowns her in a lily pond....but then notes his reflection in the pond with terrifying results!
Reprints

Script credit from Tales of Terror: The EC Companion. Feature is Vault of Horror despite lack of header to that effect because Vault-Keeper introduces the story.

Genre
horror-suspense
Characters
The Old Witch [cameos]; Dr. Perdo
Synopsis
In a small town populated by many fat people, Dr. Perdo comes to town, offering to help those people through the use of a tiny weight-loss capsule. Four accept his offer and the capsule works on them to perfection, and the town is sorry to see Dr. Perdo move on. But then, the four people suddenly die horrible deaths as if they had starved to death. Six months later, Perdo, in disguise, returns to the town, but is discovered and runs into the cemetery to hide and into the mausoleum of one of his victims, where he comes face-to-face with the thing that had killed his victims: a giant tapeworm!
Reprints

The Conquerors of the Moon! (Table of Contents: 10)

Has a spot illustration.

Genre
science fiction
Characters
Raymond Williams Jr; Doctor Vandeveer Hybolt; Martha Anders; Mr. Axel
Synopsis
Raymond Williams Jr. is transported 25 years into the past where he discovers why his father left the family abruptly after he was born.
Reprints

The Worm Turns (Table of Contents: 16)

Genre
science fiction
Characters
Captain Becker; Vaughn
Synopsis
Vaughn learns about cruelty to animals after the spaceship his is part of the crew of crashes on another planet.
Reprints