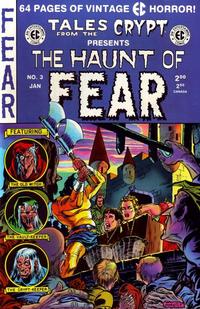 Genre
horror-suspense
Characters
The Old Witch (host); Emile (a chemist, death); father of Emile and Stanley (death); Stanley (villain, a vampire, Emile's older brother)
Synopsis
Emile is greeted warmly by his brother, Stan, and their father when he comes to visit. Too bad there's a vampire roaming the area. When the vampire kills their father, Emile injects himself with a radioactive isotope. He plans to become the vampire's next victim, and he leaves a note instructing Stan to use a Geiger counter to track the vampire to its lair after it kills Emile. It's a good plan, with one tiny flaw. Stan is the vampire! After he kills Emile, he tears up the note, laughing wildly.
Reprints

Genre
horror-suspense
Characters
The Vault-Keeper (host)
Synopsis
Peggy and Charles are just starting their honeymoon when their car mysteriously dies on a deserted country road during a raging thunderstorm. They manage to make their way to an abandoned house, where they try to make the best of the situation. During the night, Charles wakes up, but the house is changed. He soon realizes he has gone back in time, and this was Peggy's aunt's house. To his horror, he witnesses Peggy's aunt murder her husband with an axe. Charles awakes once again, this time for real. Whew, it was just a dream! But then, why is Peggy closing in on him with an axe?
Reprints

Genre
horror-suspense
Characters
The Old Witch (host)
Synopsis
The ladies of the court constantly flirt with the lonely King, but he has no interest in their obvious ambitions. Then, he falls in love with a young scrubbing woman, Sylvia, and she consents to be his bride. After they are married, Sylvia is approached by her previous lover, Cedric, and she admits that she still loves him. One of the ladies of the court overhears this and tells the King, who orders Sylvia and Cedric beheaded. But, when the ladies begin badgering him once again, the King snaps and has them punished: one loses her eyes, another her ears, the last her tongue.
Reprints

Genre
horror-suspense
Characters
The Crypt-Keeper (host)
Synopsis
Two baseball teams are mired in a brutal rivalry, with intentional injuries mounting on both sides. When one team's star player collapses during a game, it's discovered he was poisoned. After further investigation, the poison is traced to the spikes on an opposing player's shoes. So, the victim's teammates decide to get some payback. That night, they play an impromptu game of their own. But, darn it, they must have lost their equipment! They're using a head for a ball, internal organs to mark out the bases, etc...
Reprints

Genre
science fiction
Synopsis
Ron and his Dad are witness when a spaceship crashes nearby and a hideous alien emerges. Ron's Dad kills it and the authorities are overjoyed to have a ship capable of interstellar travel. Ron enlists in the army and is chosen to be the first to fly the ship back to its home planet. The landing causes damage, though, which takes years to repair. Even worse, the planet's reverse rotation is causing Ron to go back in time. And the environment is mutating him into a hideous alien. He finally gets back to Earth just in time to emerge from his ship and get killed by his younger self and his father.
Reprints

Genre
science fiction
Characters
Mary Morris; Mink Morris (daughter of Mary Morris); Henry Morris (Mary's husband); Joseph Conners; Anna; Peggy Ann; Helen (Mary's friend in New York); Tim (Helen's son); Drill (villain, a Martian)
Synopsis
To their parents' collective amusement, several kids are playing "Invasion". It's a game that involves them bringing everyday items to a field, and using those items to build a gateway to another realm. Unease does begin to grow, though. This all seems to be pretty sophisticated stuff for children. Finally, one of the kids walks into her house and tells her Mom that they have "visitors". Behind her, misshapen figures approach.
Reprints

The Ashtray (Table of Contents: 9)

Genre
science fiction
Characters
Colonel Lawrence Ardsley (death); General Minorly (Medical doctor); Colonel David Todd (villain); Lynn Ardsley (villain, Lawrence's wife)
Synopsis
David and Lynn are married, but she's cheating on him with Larry. When Larry and David are tasked with flying a ship to Mars, Larry murders David upon arrival and passes it off as a death caused by an unknown virus. Now, he and Lynn can be together. But, when he arrives back at the station orbiting Earth, he finds it deserted. He soon receives a message from Earth. He has to remain on the station for the rest of his life. After all, he may have contracted the same "virus" that killed David.
Reprints
Keywords
Space Rocket #X-1; Space Rocket #X-2

Genre
science fiction
Characters
Tarlton
Synopsis
Tarlton, the Earthman, has landed on the planet Cybrinia, home to mechanical life. He is to judge whether or not Cybrinia will be allowed to "partake of the wonders of Earth". As he is touring the planet, he notices that certain robots seem to be relegated to more menial work than others. In fact, they almost seem to be second-class citizens. After the tour, Tarlton informs the robots they are not worthy yet. As he boards his ship to return to Earth, we finally see Tarlton's face for the first time. No wonder he was so affected by the tour. As a black man, he's seen segregation firsthand.
Reprints

Bill Gaines once related that this story actually got him in hot water with censors. They insisted that EC remove the drops of sweat from Tarlton's face in the final panel. Apparently, they found the thought of a black man's sweat offensive. Gaines threatened to sue if the story wasn't approved as-is, and the censors backed down.