This issue was selected for reprinting by readers in online voting for Millennium Editions. There is no note on its cover to indicate the election, while all other winners carry a notation.

Final release in DC's series of Millennium Editions.
This issue has variants: 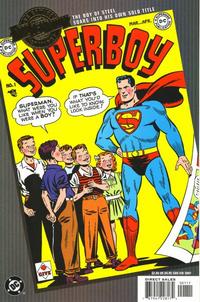 Superboy #1 The Boy of Steel Flies Solo (Table of Contents: 1)

An overview of the context of this issue and the character, stories, and credits. Appears on inside of front and back covers.

The Man Who Could See Tomorrow! (Table of Contents: 2)

Really a Superman story, with the Superboy segment as a flashback.

How to make a rubber-band powered rocket, and a tin-can string telephone. Art is credited to Win Mortimer in this issue.

The Boy Vandals! (Table of Contents: 5)

This Millennium Edition incorrectly credits the art to John Sikela and Ed Dobrotka.

The Language of the Sea (Table of Contents: 7)

First Line of Dialogue or Text
It's a beautiful day for a hike in the hills!
Genre
humor
Characters
Homer; Homer's wife
Reprints

This sequence was near the end of the original book, but moved up here.

This was the last of the Millennium Editions, and thus a page of credit corrections for the series as a whole was added. There are corrections to the following Millennium Editions: Action Comics #252, All Star Comics #3, Batman #1, The Brave and the Bold #28, Detective Comics #38, Detective Comics #225, Detective Comics #359, Flash Comics #1, Mysterious Suspense #1, Police Comics #1, Sensation Comics #1, Showcase #9, Superman #1, Superman #76, Whiz Comics #2, Wonder Woman #1, and World's Finest Comics #71. There is also this acknowledgment: "We would like to thank the following people who helped make the Millennium Editions possible through the loan of source material and identification of talent: Jerry Bails, John Coates, Joe Desris, Mark Evanier, Paul Hamerlinck, Richard Howell, Robert Hughes, Robert Klein, Pat Lang, Richard Morrissey, Roy Thomas, Michael Uslan, and the Diamond International Galleries." Appears on page 50 of this issue.

[Batman Beyond Return of the Joker] (Table of Contents: 14) (Expand) /