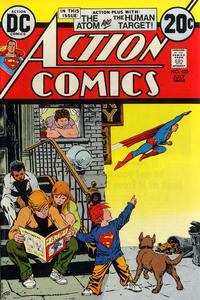 The Last Moa on Earth! (Table of Contents: 1)

Job Number
S-1467
Genre
superhero
Characters
Superman [Clark Kent]; Jon Halaway
Synopsis
The hunter Jon Halaway shoots the last of the moa birds and is guilt-ridden by this. Eventually he finds a moa egg and returns to Metropolis. The moa hatches and has gained super-powers.
Reprints

The Short-Walk-to-Disaster Contract! Clause #1: I Have a Cousin in the Business... (Table of Contents: 4)

Job Number
S-1529
Genre
superhero
Characters
The Human Target [Christopher Chance]; Luigi; Antonio (Luigi's cousin)
Synopsis
Human Target is hired by his servant Luigi to pose as Luigi's cousin Antonio. He is a circus artist and his act has been sabotaged a couple of times.
Reprints

Credits for script and inks confirmed from Julius Schwartz's editorial records, provided by DC Comics. Schwartz's records credit the pencils to Giordano but the printed credits include a credit for Adams and Neal Adams' checklist (http://www.nealadams.com/comicchecklist.html) credits the pencils to Adams.