On-sale date from copyright registration. On-sale date of October 30 in ad in Batman #14.

[Sink the Japanazis with Bonds & Stamps] (Table of Contents) 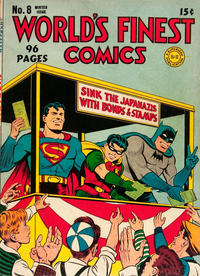 Called "The Road to Glory" in the table of contents.

Tanks for the Memory! (Table of Contents: 4)

Genre
humor; military
Characters
Drafty; Tim; un-named army general
Synopsis
Drafty and Tim are put on K.P. duty, but manage to break everything in sight, so they are assigned to anti-tank detail instead.
Reprints

The Magic Lantern (Table of Contents: 5)

Genre
adventure
Characters
Zatara; Grubs (villain)
Synopsis
A couple of crooks watch Zatara perform magic with an ancient lamp, so they steal it, hoping to use its magic to commit crimes.
Reprints

The Luck of the Lepparts (Table of Contents: 9)

Genre
adventure
Characters
Tovarich Aronya; unnamed Corporal; Vasil (villain)
Synopsis
Vasil has traveled through the snow and the cold with secret plans in his possession only to be uncovered as a spy by a Russian peasant.
Reprints

The Unluckiest Man in the World! (Table of Contents: 11)

The Minute Man Answers the Call (Table of Contents: 12)

Genre
advocacy
Characters
Uncle Sam; General George Washington; General Charles Cornwallis
Synopsis
Throughout history, American men have been ready and willing at a moment's notice to stand and fight for this nation's freedom...a call now being accepted by a new generation of "minute men"! The story of how the Minuteman -- the citizen-soldier -- helped win the American Revolution, their spirit has watched over America's other battles against tyranny, and how that spirit lives on in 1943.
Reprints
Keywords
Concord; Lexington; Minutemen; The Alamo

Smoked Out (Table of Contents: 13)

Genre
war
Characters
Carson; Saro; Conway; the Japanese (villains)
Synopsis
Little Saro has been chastised repeatedly about playing with matches, as he was too young to do so, yet it was that very thing that helped save himself and others from the Japanese.
Reprints

A Double for Trouble (Table of Contents: 16)

Genre
detective-mystery
Characters
The King [King Standish]; Al Norton (newspaper reporter); The Chicken (villain); Slugger (villain)
Synopsis
While riding the subway, the King decides to make himself up like a passenger he sees sleeping in a seat. Unknown to him, that man is a reporter who has belittled "The Chicken," whom he suspects in involved with the Nazis!
Reprints

Brothers in Law! (Table of Contents: 18)

Art and letterer credits by Craig Delich, verified by Burnley.