The on-sale date is from the publication date recorded in the Catalog of Copyright Entries, Part 2, Periodicals, 1943, New Series, Vol. 38, No. 1.

Artist revision from C.C. Beck by Craig Delich 2011-28-11 to Marc Swayze per Swyaze's column in Alter-Ego #19 verifying he did the cover. 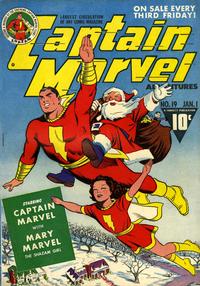 The Phantom of the Department Store (Table of Contents: 2)

The Training of Mary Marvel (Table of Contents: 3)

Genre
superhero
Characters
Captain Marvel [Billy Batson]; Mary Marvel [Mary Batson]
Synopsis
An eminent professor is made a dupe by a phony scientist/explorer named Greaseley, who claims to have brought live native creatures back from the planet Venus, and together, Mary & Billy [as the Marvels] put a stop to this scam.
Reprints
Keywords
Radio Station WHIZ

Some reprint information and synopsis added by Craig Delich (Jan. 14, 2007).

P. C. Hamerlinck, in Alter Ego #147 (July 2017), asserts that Swayze did the entire art job on this story. So reference to Swayze only doing the art on the Mary Marvel figures only removed.

His Achilles Heel (Table of Contents: 4)

The Wizard's Mark (Table of Contents: 5)

The Ego Exchanger (Table of Contents: 7)

Genre
superhero
Characters
Captain Marvel [Billy Batson]; Steamboat Bill
Synopsis
In a diverting mind-swap ("ego changer") between Billy/Captain Marvel and Steamboat, whenever Steamboat says the magic word, Billy changes into the person of Marvel, but with the mind of Steamboat!
Keywords
Shazam