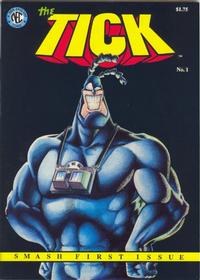 Genre
humor; superhero
Characters
The Tick (1st appearance); Clark Oppenheimer (1st appearance); VILLAINS: Ninjas
Synopsis
The Tick arrives straight from the nuthouse and into The City where he decides to be a superhero. After having a tussle with ninjas and being run over by a train, he is no closer to realizing his lofty goals.
Reprints

How to Draw The Tick (Table of Contents: 2)

Genre
humor; superhero
Characters
The Tick
Synopsis
One page art lesson on how to draw The Tick with accompanying oval.
Reprints

Story does not appear in the 1st printing.

The Tick (Table of Contents: 3)

Story does not appear in the 1st printing; This is a very early (and rather rough) try at The Tick by Edlund that appeared in the New England Comics Newsletter #14 and 15 which predate The Tick #1.