The Plot Thicks... (Table of Contents) 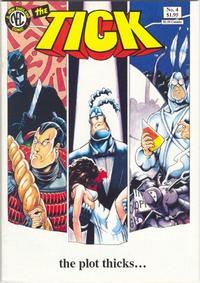 A Big Fight (Table of Contents: 1)

Genre
humor; superhero
Characters
The Tick; Oedipus [Oedipus Ashley Stevens]; Arthur; Paul the Samurai; Reginald Stevens; Amanda Stevens; Shing; Ninjas (villains); The District Manager (villain); Sagin (villain)
Synopsis
Tick and Oedipus are attacked at her parents' dinner party by a group of ninjas. After Oedipus is injured, Tick has a crisis of sanity and decides the best thing to do is destroy Ninja World, which he does. Conflict ensues over the Thorn of Destiny and Tick comes close to losing it until Arthur shows up to make sense of a few things. Paul the Samurai trails his enemy Sagin from Japan and prepares to take him down with a loaf of deadly French bread.
Reprints
Keywords
Japan; Ninja World; Thorn of Destiny

Tick Quick Quip of the Month: "What is this, a CONVENTION? Can't a guy wreak havok in privacy?"

Centerfold poster of an interior splash page (a small Tick is menaced by the looming City).