Comic has at least 3 printings but only the 1st has an 8 page "Red Eye" comic insert, and is indexed here. 2nd and later printings are indexed under #8 [later printings].
This issue has variants:

First printing also has a variant cover with no price or company logo. 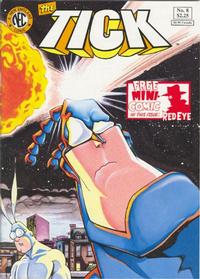 A Matter of Cosmic Import...And Other Stories... (Table of Contents: 2)

Genre
humor; superhero
Characters
The Tick; Arthur; Man-Eating Cow; Red Eye; Dr. Edward Robelord; Dot; VILLAINS: Two Goons
Synopsis
The Tick is struck on the head with what looks to be a meteor but turns out to be sediment from Utah. Arthur and Tick have dinner with Art's sister, but their repast is interrupted by two goons shooting at them. After Man-Eating Cow lends a...uh...an udder in dispatching the villains, Tick decides that he and Arthur will leave for New York to fight real crime and leave their bovine companion to patrol The City in their stead. Tick reads.
Reprints

Tick Quick Quip of the Month: "Hey, don't knock crazy. The Romans were crazy, and they got all the girls."

Synopsis
Letters page contains an excerpt of a letter by crazed Tick fan Sam Ismail requesting an "uncut" copy of The Tick #2 and punctuated by 83 hand written pages of the word "Please".
Reprints