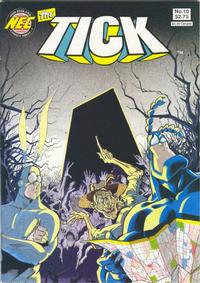 The Tick / promo (ad from the publisher) / 1 page (report information)

Some Obstacles and a Partial Resolution (Table of Contents: 2)

Genre
humor; superhero
Characters
The Tick; Arthur; Chainsaw Vigilante; Red Eye; VILLAINS: The Monoloth; Crazed Villagers; Portugese Man-O-War; Jelly Boy
Synopsis
Tick wraps up his battle with Chainsaw Vigilante and he and Arthur hit the road again. Tick discovers that his meteor is inhabited by tiny aliens. Arthur picks up the nefarious hitchhiker Red Eye and Tick tries to annoy him enough that he will leave the car without killing them. Pulling into Monolith, Kentucky, our heroes are captured by villagers who want to put them through gruesome scientific experimentation at the behest of the, well, of the big Monoloth that resides in the town.
Reprints

Tick Quick Quip of the Month: "You're pretty uppity for a sidekick, Pal. Watch it, or I'll start calling you Artie, or...or Something Lad!"

Bottom half is an ad for the Rockin' Bones title by NEC.