Comic has gone through at least two printings. 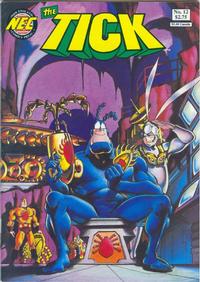 Inside front cover. Panel from inside issue, credits and indicia.

Genre
humor; superhero
Characters
The Tick; Arthur; Tri-State Super-Hero Congress; VILLAINS: Barry Hubris; Host; The Terror; Multiple Santa; Mr. Tragedy; The Fuzzy Person; Tuun-La
Synopsis
Having defeated Barry for the right to use the super hero name "The Tick," it is determined that the Tick is also entitled to his base of operations and all of his equipment. As the Tick and Arthur move into the Tick Cave underneath Barry's mansion, their opponent turned host hatches a devious plan. When our heroes head out to investigate nefarious happenings at Brenda Industries, Barry calls his rogues gallery and tells them all about his new look, his new sidekick and where he can be found.
Reprints

Tick Quick Quip of the Month: "I have...Cary Grant karma, because I always prevail! Barry has Mussolini karma, because he was doing great for a while, and then he had a really bad day."

Ben Edlund discusses a few topics including the thirteenth issue of The Tick which never materialized.