All data from Eric Schumacher (December 8, 2005). This book doesn't contain a text story.

Full indicia [print quality is poor and the 5 in 45 is a rather dense smudge even in a clear scan- possibly some other number]:
CAPTAIN BATTLE published by Magazine Press, 45? East 17th Street, New York, N. Y. Printed in U. S. A.

This is a particularly strange issue to be connected to Chesler, despite the Chesler Syndicate mark on the cover. It consists of reprints of Silver Streak issues published by Your Guide Publications, Inc. or Lev Gleason's Comic House, Inc. Of the reprinted issues, the earliest are believed to have been produced by Funnies, Inc. while the later issues seem likely to have been produced by the Binder studio (which admittedly featured many Chesler alumni, including studio head Jack Binder) or by freelancers or in-house staff. None of this material appears to be the direct product of the Chesler shop, although it is difficult to make such statements with confidence. 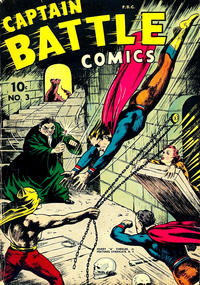 Captain Battle and the Volcano of Death! [Chapter 2] (Table of Contents: 1)

Captain Battle in the Spells of Black Magic [Chapter 3] (Table of Contents: 2)

[Camp Out for Health] (Table of Contents: 3)

[The Death of Biff Baily] (Table of Contents: 4)

The Mystery of the Monstrous Fly (Table of Contents: 5)

Tell it to the Marines / cartoon / 1 page (report information)