[Somewhere Under This Earth!!] (Table of Contents) 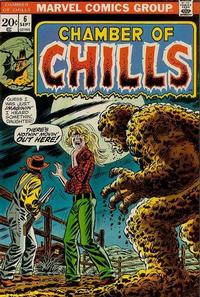 Somewhere Under This Earth!! (Table of Contents: 1)

Job Number
1465-Z
Genre
science fiction
Synopsis
An evil dictator orders the creation of a monster which he then plans to duplicate to create an army, but the monster cannot be controlled.
Reprints

Where There's a Will (Table of Contents: 2)

Genre
horror-suspense
Synopsis
A jealous man uses voodoo against his romantic rival, but when the hoped-for death takes place, an unexpected inheritance results in the man's doom.

Confirmed with Wayne Muromoto that he was the artist. Nick Caputo had previously suggested that Wayne Muramoto may be a pseudonym for Jim Starlin.

A Sight For Sore Eyes (Table of Contents: 4)

Job Number
[B-904]
Genre
horror-suspense
Synopsis
A man is taken to an unorthodox surgeon who transplants a second pair of eyes into his forehead in order to correct his vision.
Reprints

Reading More But Enjoying It Less? (Table of Contents: 8) (Expand) /