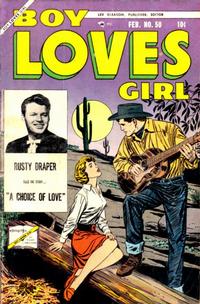 Genre
romance
Characters
Rusty Draper; Sally Bennett; Lon Dawson
Synopsis
Sally returns to her late uncle's ranch after 8 years in the city. Foreman Lon proposes marriage to her, but she says she won't move back to the ranch. Sally intends to sell the ranch and it'll be converted to a dude ranch. Lon demands his back wages before the sale. Sally enters a chuck wagon race to win the money; Lon loses because he saves Sally from crashing. Lon's pal Rusty explains what happened. Sally gives Lon the ranch and they will be married.

Sally's last name is spelled "Bennett" on page one and "Bennet" on page 2. Sally is described on page one as having red hair, but her hair is blonde throughout the story.

I Was A Born Snob (Table of Contents: 2)

Genre
romance
Characters
Donna Radford; Frank Kovac; Mr. Radford; Mrs. Radford; Aunt Matilda; Mrs. Van Ghent; J.B. Smith
Synopsis
Donna and her family have a long tradition as one of the leading families in Seaview. They fear developer Frank is going to turn the town into a "common seaside resort." They pressure local businessmen into non-cooperation with Kovac, even though some townspeople think he would help revive the economy. Donna and Frank fall in love but still disagree and break up when he won't change his mind. Donna's opposition ruins Frank but she changes her mind and helps his plans. The town will be reborn and Donna will marry Frank.

First Line of Dialogue or Text
Hi! The whole world's filled with music

The Right Man to Marry (Table of Contents: 4)

Genre
romance
Characters
Barbara "Barby" Slater; Rita Slater; Mrs. Slater; Dean Carrol; Frank; Luigi; Carl Dexter
Synopsis
Barby has been dominated by her mother and sister Rita all her life and is afraid to make decisions on her own. She dates co-worker Dean and hides this from her mother and Rita; when Rita sets her up on a date with Carl, Barby has to go. Her mother and sister try to pressure her into marrying the wealthy Carl instead of Dean. Barby breaks up with Dean but changes her mind and goes back to him.

The Love I lost (Table of Contents: 5)

Genre
romance
Characters
Joan; Dr. Peter Harmon; Lorna Lewis; Ted; Eve; Dr. Samson; Sally
Synopsis
When Ted breaks up with her over Lorna, Joan impulsively goes down a ski slope and crashes, paralysing her legs. Ted apologises for his actions and faithfully accompanies her as she tries to recover, but Joan feels he just pities her. Joan is treated by doctor Peter who kisses her, but she is conflicted because of Ted. Recovering her ability to walk, Joan goes home. She discovers Ted and Lorna have been trying to help Joan recover so they can marry each other. Joan wishes them well and calls Peter with the good news that they can be together

Peter's last name is spelled "Hermon" on the splash panel but becomes "Harmon" on page 4 and thereafter.