The cover says Shatter Special but the indicia is simply Shatter. On-sale date from Amazing Heroes #66 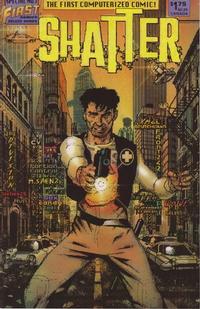 Synopsis
Mike Gold talks about how the computer generated comic, Shatter, was created.

Genre
science fiction
Characters
Sadr Al Din Morales (Shatter); Cyan Dalriada (the female murderer he is investigating)
Synopsis
Sadr Al Din Morales(explained as a name given by his hispanic parents to gain the good graces of their Arab employer by giving him, their son, an Arab name) nicknamed "Shatter", lives in a Bladerunner-esque mid-21st-century Chicago (Daley City). In the future, virtually all employment is temp-employment, contracted by online-computer job listings. Shatter uses a number of aliases to create qualifications for different kinds of work. Working as a temp police officer, under false name "Jack Scratch", Shatter takes a new police-temp assignment investigating the murder of a corporate executive.

The murder Shatter investigates leads in future stories to an illegal trade by the Simon Schuster Jovanovich corporation that Cyan previously was a high-level employee of. SSJ was killing talented people, extracting their genetic RNA, and selling it like an illegal drug to buyers who would inject it to gain the stolen talents of those murdered.