The Brain and the Bomb (Table of Contents)

Logo design credit from Todd Klein via his Facebook page, used with permission. 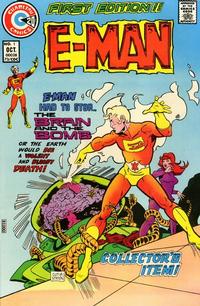 The Beginning (Table of Contents: 1)

Origin and first appearance of E-Man (Alec Tronn, an energy being from space), his girl friend Nova Kane and The Brain from Alpha Centauri.

This is the only non-ad portion of this book to NOT be included when it was reprinted by Modern Comics.

Intro of The Knight, agent of C.H.E.S.S.