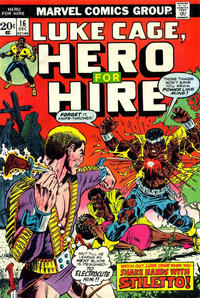 There is a dispute on correct writer credits. The credit line reads "Tony Isabella writer, Billy Graham penciller", etc. In 2006, Steve Englehart has said that he co-plotted this story with Billy Graham. On July 5, 2013, Tony Isabella stated that he wrote this story "full script style" without plotting assistance from either Englehart or Graham.

A "special thanks to Marv Wolfman and Len Wein" credit appears on the splash page.

Monumental Memorandums of Mice and Marveldom! (Table of Contents: 2)