The girlfriends of the JSA members appear in the story, but only four are identified: Doris Lee, Shiera Sanders, Inza and Peachy Pet (adopted daughter of Johnny). A Junior Justice Society of America code message in the Hawkman code is found on the Editor's page.

The Man Who Created Images! (Table of Contents) 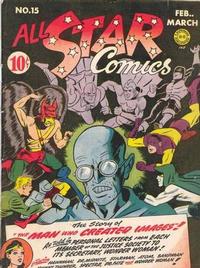 [The Man Who Created Images! Introduction] (Table of Contents: 3)

Wonder Woman is not listed in the roll call, except in the text preceding it.

The first page of the introduction is reprinted in Wonder Woman The War Years 1941-1945 (Chartwell Books, 2015 series).

[The Man Who Created Images! Chapter 1] (Table of Contents: 4)

Genre
superhero
Characters
Hawkman [Carter Hall]; Hawkgirl [Shiera Sanders]; "Rubber-Man" Nevil (rubber plantation tycoon, death); Mark Nevil (Nevil's son, chemist, death); Homer Nelson (villain, partner of Nevil); "Big Tiny" Norman (villain); two unnamed crooks (villains)
Synopsis
Hawkman is working on a strange case concerning men who disappear after being touched. Tracking down clues after seeing a man murdered and the killer disappearing in a flash of light, he discovers a man named Big Tiny, who may have knowledge about what is happening. Tiny, however, thinks the Feathered Fury is an agent of "The Brain Wave," but Hawkman convinces him otherwise and takes him into custody, then heads out to Sharktooth Bay and the tower in which Brain Wave resides.
Reprints

The chapter is narrated by the Hawkman through his letter to Wonder Woman.

[The Man Who Created Images! Chapter 2] (Table of Contents: 5)

The chapter is narrated by Dr. Mid-Nite through his letter to Wonder Woman.

[The Man Who Created Images! Chapter 3] (Table of Contents: 8)

Genre
humor; superhero
Characters
Johnny Thunder; The Thunderbolt [Archibald]; unnamed Naval officer; Horatio Morrison (villain, museum director); Sticker (villain)
Synopsis
After setting a record for the lowest score on the Naval Officer Candidate School exam, Johnny begins looking into the Morrison Museum, a supposedly public museum that avoids paying taxes like the private museum it really is. In reality, the museum serves as a warehouse for stolen loot and when brother John investigates, the statues of Caesar and others come to life before his eyes. The Thunderbolt puts an end to this, but is also mystified about the sudden disappearance of the ghostly figures. Further investigation uncovers the stolen gems, and the criminals behind the plot are apprehended.
Reprints
Keywords
Morrison Museum; Say You

The chapter is narrated by Johnny Thunder through his letter to Wonder Woman. Johnny wears his U.S. Naval uniform in the story.

[The Man Who Created Images! Chapter 4] (Table of Contents: 9)

Genre
superhero
Characters
The Atom [Al Pratt]; Johnny Spartan (baseball player); Spartan's unnamed Coach; "Runty" Becker (villain); Big John Timberlake (villain, racketeer); unnamed thug (villain)
Synopsis
Johnny Spartan, big-league ball player, was once hit by a pitch and has been plate-shy since. A shifty-eyed man approaches and tells Johnny that he has the cure for this problem. It's cured all right, but at crucial times in the game, Johnny doesn't make sure plays, and the Atom confronts him. He discovers that, by Johnny not making plays, a gambler is making money. Atom makes quick work of the guy.
Reprints

The chapter is narrated by the Atom through his letter to Wonder Woman.

This filler does NOT appear in the Archives.

The Junior Justice Society of America (Table of Contents: 12) (Expand) /

Genre
superhero
Characters
The Sandman [Wesley Dodds]; Sandy [Sandy Hawkins]; Stanley Cord (villain); Baldy (villain); Baldy's thugs (villains)
Synopsis
Wealthy men across the nation begin to suffer nightmares concerning the Sandman, perhaps brought on by guilty consciences. They dream that the Sandman was actually blackmailing them, and then fading away! One night, however, Sandman appears before Wesley Dodds and Sandy Hawkins, and the pair don their costumes to investigate what the true situation is and put an end to this vicious blackmailing racket.
Reprints
Keywords
The Sandmobile

The chapter is narrated by the Sandman through his letter to Wonder Woman.

Death Rays from the Sun (Table of Contents: 14)

This text story does NOT appear in the Archives.

Genre
superhero
Characters
Starman [Ted Knight]; Edwin Ackerman (physicist); Lucy Ackerman (Edwin's wife); Henry King [aka the Brain Wave] (villain, flashback); Blackie (King's pet dog, flashback); two thugs (villains)
Synopsis
Edwin Ackerman is beset each night by phantoms that keep him awake. One day he decides he'll get sleep, no matter what, but is once again is awakened by three strange little people that are seen even by Starman, who learns the man is working on atomic energy and the little imps are begging him to stop the project. Ackerman tells Starman of a kid he knew growing up named of Henry King, who had the ability to "create" his own friends. Seeing a connection with that person and the dreams, Starman learns about the Brain Wave and decides to head to Sharktooth Bay to confront him.
Reprints
Keywords
Gravity Rod

The chapter is narrated by the Starman through his letter to Wonder Woman.

Genre
superhero
Characters
The Spectre [Jim Corrigan]; Big Turk Thompson (villain); Thompson's gang (villains)
Synopsis
The Spectre interrupts robbery by confronting the felons, who then disappear in a puff of smoke. He later learns of more phantom burglaries, connects it with findings made by the Psychic Research Society in Boston, and puts an end to the phantom and real-life crooks before heading to the lonely tower at Sharktooth Bay...home of the Brain Wave!
Reprints
Keywords
First Union Bank; Industrial Trust Company

The chapter is narrated by the Spectre through his letter to Wonder Woman.

Genre
superhero
Characters
Dr. Fate [Kent Nelson]; "Fan" Gregory (reformed racketeer); Gregory's unnamed sister; some thugs (villains)
Synopsis
"Fan" Gregory, racketeer, had made quite a life for himself in the rackets until the very men he had murdered began appearing to him, and he vowed to go straight. But there are others who want to use his services, but he doesn't knuckle under to the pressure, but goes instead to the lonely tower of Dr. Fate to seek assistance. Fate promises help and delivers.
Reprints
Keywords
The Salem Tower

The chapter is narrated by Doctor Fate through his letter to Wonder Woman.

[The Man Who Created Images! Conclusion] (Table of Contents: 20)

Genre
superhero
Characters
Justice Society of America [Dr. Fate [Kent Nelson]; The Sandman [Wesley Dodds]; Hawkman [Carter Hall]; Starman [Ted Knight]; The Spectre [Jim Corrigan]; Johnny Thunder; Dr. Mid-Nite [Dr. Charles McNider]; Wonder Woman [Diana Prince]]; Peachy Pet; Hawkgirl [Shiera Sanders]; Dian Belmont (dressed as the Sandman]; Doris Lee (dressed as the Starman); Inza Cramer (dressed as Doctor Fate); Clarice Winston (dressed as the Spectre); Sir Lancelot (image only); two unnamed college professors of Henry King's; Brain Wave [Henry King, Sr.] (villain, introduction); Attila the Hun (villain, image only)
Synopsis
At Sharktooth Bay, a strange figure called the Brain Wave oversees the inert forms of the JSA members. He thinks back to the time that he learned the ability to materialize people out of thin air. Unfortunately, he was only motivated by money, and that led him to a life of crime. Then he sees Wonder Woman and the girlfriends in their uniforms, and decides to use mental images of their boyfriends against them, and are captured. Brain Wave attempts to gas them all, Wonder Woman breaks her fetters and breaks out of their prison just in time to see the Brain Wave jump to his death from the tower.
Reprints

The Brain Wave appears to commit suicide, but returns in All-Star #17 with an explanation of how he survived.