First Line of Dialogue or Text
Every guy was a blind date in those days!
Genre
humor
Keywords
armor; knights 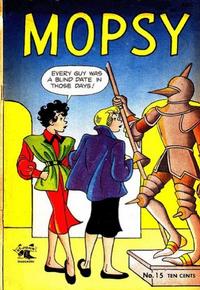 Creator Gladys Parker modeled Mopsy after herself, she was a pert, tousle-haired brunette. The strip's story lines dealt with Mopsy's daily activities. During WWII Mopsy worked as a nurse, a munitions-plant worker, and other jobs women typically had during the war, and this was a very popular strip during during that time. When the war ended Mopsy went back to civilian life, but she continued to maintain her popularity until 1965 when the strip ended. Gladys Parker passed away the following year." quote thanks to Samuels Designs at http://72.14.203.104/search?q=cache:6STrlLDnkloJ:
www.samuelsdesign.com/comics/pages/mopsy1.htm+
mopsy&hl=en&lr=&strip=1

Hey Kids! Have Heaps Of Fun With Famous Slinky Toys! (Table of Contents: 2)