Granitor--Lord of the Gargoyles! (Table of Contents) 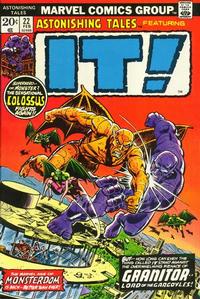 Genre
horror-suspense
Characters
It, the Living Colossus; Bob O'Bryan; Granitor, Lord of the Gargoyles; Dorian Delazny; Crustor (introduction); Magnor (introduction); Diane Cummings; Grant Marshall; Strator; David Hartnell (flashback, from Strange Tales (Marvel, 1951 series) #74); Prince Gorgolla (flashback, from Strange Tales #74); Gargoyles of Stonus Five
Synopsis
Lord Granitor (father of Prince Gorgolla from Strange Tales #74) is finally able to leave Stonus Five and go to conquer Earth. Magnor, who is among a rebel group of Gargoyles on earth, warns Bob O'Bryan of the coming invasion. Bob takes over the body of It, the Living Colossus to try to stop Lord Granitor but is ultimately unable to stop him from leaving with Diane as his hostage.
Reprints
Keywords
monsters

Letters credit for Danny Crespi per George Olshevsky's Marvel Comics Index #7B. Incorporates 3 3/4 pages from "Gorgolla! The Living Gargoyle!!" from Strange Tales #74 reprinted on pages 8-10 and the first 6 panels of page 11.

The original story in Strange Tales #74 is also reprinted in Where Monsters Dwell #1 and #35.

Kings and Things To Take By Storm (Table of Contents: 2)

Editorial about the origins of It, the Living Colossus. Appears between pages 12 and 13 of the story sequence.