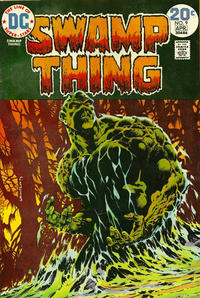 The Stalker from Beyond! (Table of Contents: 1)

Job Number
J-3329
First Line of Dialogue or Text
Night freight: clattering down out of Pittsburgh, chewing up track toward Baton Rouge...
Genre
horror-suspense
Characters
Swamp Thing [Alec Holland]; Rufe; Elmo; Abigail Arcane; Matt Cable; Smithers; Captain Brad Samson; Private Optik; O'Reilly; Trumbo; Twitchett
Synopsis
Swamp Thing returns to the swamp only to find that an alien ship has crashed there and its occupant is attempting to repair his ship. Matt Cable and a squad of men show up looking for the alien.
Reprints

According to Len Wein, Jeff Jones inked the last 9 pages: "'The Stalker from Beyond'...the last nine pages of that story were inked by Jeff Jones..." (http://www.tcj.com/the-len-wein-interview/2/). As per Nick Caputo, we had formerly credited "all or most of pages 11-20" to Mike Kaluta.

Job Number
J-3405
First Line of Dialogue or Text
To everyone who has been sending in requests for back issues: please!