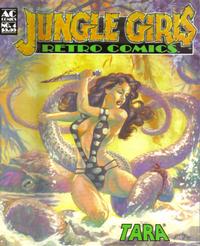 Lair of the Beast-Men (Table of Contents: 2)

Genre
jungle; superhero
Characters
Tara Fremont; Darkshade; Roger Brant [Darkshade]; T.C. Fremont; Janis Lawson; Charles Lambert
Synopsis
T.C. Fremont offers Roger Brant a job designing brochures and ads for the Dark Continent. Tara searches for Charles Lambert and Janis Lawson, caretakers for The Dark Continent who are missing. She follows a scream to where she finds Janis being attacked by a giant octopus. Janis is pulled into an underwater cave and Tara follows. There she is attacked by beast-men who say that Janis has been chosen to be a human sacrifice. After they take Janis away Charles shows up and frees Tara, who goes after the beast-men and catches up to Janis just as she is being by the giant octopus.

Chapter Two 'Into the Jaws of the Sea Beast' (Table of Contents: 4)

Genre
jungle; superhero
Characters
Tara; Janis Lawson; Charles Lambert; Randall Crowley (death); Darkshade
Synopsis
Tara jumps in to try to save Janis Lawson but she is also eaten. However, it turns out that the giant octopus is electronic and is operated by Randall Crowley, who also controls the Beast-men. He plans to kill the animals on the Dark Continent to sell their pelts. When Darkshade enters Randall's subconscious, he brings the spirits of the animals that Randall has killed and he goes mad. He thinks that the animals he has killed are going to kill while trying to escape he falls over the cliff and is impaled on one of the skinning hooks.

The Cursed Land! (Table of Contents: 5)

Characters
Camilla
Synopsis
An editorial discussing the various jungle women who have starred in comics.

On the Island of Doom! (Table of Contents: 7)

Genre
jungle
Characters
Nyoka; Larry Grayson
Synopsis
Larry Grayson is assigned the job of staying on an uninhabited island for a week to determine if it is suitable for a navy base. Nyoka reluctantly leaves him there but talks to him by radio each day. A few days into the week, Larry determines that monsoons happen often over this island and reports that it is not suitable for a base.
Reprints

Genre
jungle
Characters
Camilla; Fang; K'Bali (death); Senga (death)
Synopsis
Camilla hears that Senga (an evil Zombi queen that reportedly can not die) has declared that K'Bali must die. She rescues K'Bali from a leopard and sends a message that K'Bali will tell Senga's secrets. Senga kidnaps him and gives K'Bali a knife and tell him to kill her so that she can prove that she can't be killed. K'Bali is suddenly paralyzed and falls into a pit and is killed by wild beasts. Camilla figures that the weapon must have been poisoned and challenges Senga to a fight. Senga dies when Camilla dodges and she falls into the same pit that K'Bali fell into.
Reprints

This story was made using panels from the Camilla story "What evil curse was on K'bali?" in Jungle Comics (Fiction House, 1940 series) #91 (July 1947). The story itself is considerably different.