The on-sale date is from the publication date recorded in the Catalog of Copyright Entries, Part 2, Periodicals, 1943, New Series, Vol. 38, No. 1. 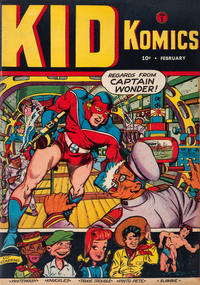 [The Origin of Captain Wonder] (Table of Contents: 2)

Professor Jordan has also created an antidote to the "wonder fluid" that returns him to his normal stature. In addition to the antidote, Prof. Jordan creates at least two rings which, when pressed, inject the wearer with wonder fluid; he gives one of these rings to Tim so that Tim can gain superhuman strength in his fight against criminals.
Syd Shores' pencils and inks are evident on pages 1 to 5 and the top half of 6. Pencils and inks were previously credited to Frank Giacoia, but the style on pages 6 to 14 do not resemble that of his signed Captain Wonder story in issue 2.

[The Haunted House] (Table of Contents: 4)

[The Pennypincher Problem] (Table of Contents: 6)

First Line of Dialogue or Text
Wilbur Witherback was a bugologist of some small local fame.
Genre
humor
Characters
Wilbur Whitherback; Hans; Adolph
Synopsis
Wilbur has an idea to help paratroopers by crossing a spider with a silkworm.
Keywords
Fairway Aircraft plant; spidermeedle

[Slick Shaw and the Webster Ranch] (Table of Contents: 8)

Kiefer did some work for Timely during this year. Pencils are very much in his style and some of the faces look to be inked by him also, but there is another inking hand involved.

The Flying Flash (Table of Contents: 11)