The top of the table of contents page says No. 1, but the indicia says V1 #4 in error. 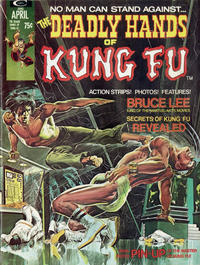 [The Testing of Shang-Chi] (Table of Contents: 3)

Genre
martial arts
Characters
Fu Manchu; Shang-Chi
Synopsis
Shang-Chi has turned against his father Fu Manchu, and now Fu Manchu wants answers from the priests who trained Shang Chi. Fu Manchu is unable to understand that it is his own brutality that has driven a wedge between him and his son.
Reprints

Ties with Master Of Kung Fu (Marvel, 1974 series) #17 as the third appearance of Shang-Chi.

What to Do Till the Sensei Comes (Table of Contents: 5)

Getting in Shape For the Martial Arts (Table of Contents: 6)

Under the Pagoda: Films of Fury (Table of Contents: 8)

The Way of the Tiger, The Sign of the Dragon and the Click of the Nielsens! (Table of Contents: 9)

This is the origin story of the Sons of the Tiger.