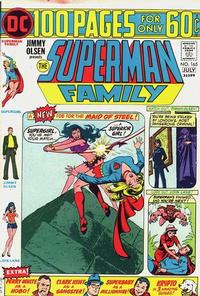 This is a re-working of the cover from Adventure Comics #397. Supergirl figure is redrawn and stats of Superman family members appear alongside story titles. David Bachman has suggested new artwork could be by Pat Broderick.

Princess of the Golden Sun! (Table of Contents: 2)

Job Number
N-939
Genre
superhero
Characters
Superbaby; Jor-El; Lara; Jonathan Kent; Martha Kent; Reverend Blake; Millie; kidnappers
Synopsis
Superbaby lands on Earth and is discovered by Martha and Jonathan Kent. When they leave him at the orphanage another couple adopts him before the Kents can. This couple is trying to use the baby to fool some kidnappers and con them out of their money.
Reprints
Keywords
Krypton

The Man Who Betrayed Superman's Identity! (Table of Contents: 6)